I am a big fan of Ansel Adams and I’ve been reading a new book about Ansel and his photographs titled “Looking At Ansel Adams: The Photographs and the Man” by Andrea G. Stillman.  I’ve learned a lot from Ansel’s teachings and photography so I thought I’d use this post to talk about him briefly. 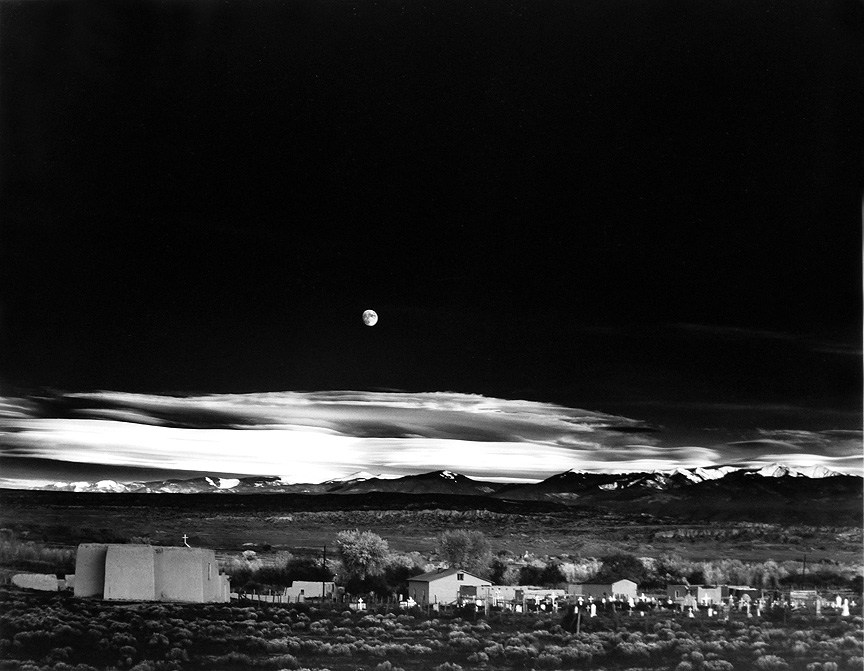 Ansel Adams (1902 – 1984) is America’s most honored photographer and is best known for his stunning black and white photographs of the American West and Yosemite National Park in particular.  His ability to pre-visualize a particular scene and then print it the way he had visualized it was unsurpassed.  Ansel was also one of America’s most influential and effective environmental advocates.  His persistent advocacy helped expand the National Park system, and laid the foundation for the park system we have today.  He has an extraordinary body of published writing – his autobiography, picture books, technical manuals, articles, and lectures.  Today, almost 30 years after his death his photographs are very popular and still reproduced on calendars, posters, and in books.  In 2006 a print of Moonrise, Hernandez, New Mexico made in December 1948 sold at a Sotheby’s auction in New York for $609,600!  Among his many credits, Ansel developed the Zone System with Fred Archer as a way to determine proper exposure and adjust the contrast of the final print.  He was elected a fellow of the American Academy of Arts and Sciences in 1966 and in 1980 President Jimmy Carter awarded him the Presidential Medal of Freedom, the highest civilian honor in the United States.  Ansel’s photograph “The Tetons and the Snake River” has the distinction of being one of 115 images recorded on the Voyager Golden Record aboard the Voyager 1 spacecraft.  Amazingly, Voyager 1 is now more than 11 billion miles from Earth, still partially operating more than 35 years after launch and is nearing interstellar space!  Ansel’s lasting legacy is helping to elevate photography to an art comparable with painting and music, equally capable of expressing emotion and beauty.

Regarding  the book,  “Looking At Ansel Adams: The Photographs and the Man,” Andrea Stillman worked closely with Ansel for seven years in the 1970’s as his executive assistant at his home in Carmel, California.  For the book Andrea selected 20 of Ansel’s photographs based on whether it was one his best, whether it had a compelling story, preferably told by Ansel, and did it illuminate some facet of his life – either personal or artistic.  She then developed a chapter around each.  10 of the photographs are considered his greatest such as Moonrise, Hernandez, New Mexico, Monolith: The Face of Half Dome, and Clearing Winter Storm.  With this book, Andrea wanted to bring Ansel to life and to encourage people to look at his photographs anew.  In my opinion she succeeded brilliantly.   Each chapter is filled with interesting information about the particular photograph it discusses and gives a fascinating insight into the story behind the photo.  Chapters 9 and 1o about Clearing Winter Storm, and Moonrise, Hernandez are wonderful.  Chapter 9 about Clearing Winter Storm chapter includes a diagram Ansel drew to guide him in printing it.  Chapter 10 about Moonrise, Hernandez has a picture of the original negative and various prints Ansel made over the years showing how he worked to achieve a print equal to his original visualization of the scene.   The book is excellent and I highly recommend it! 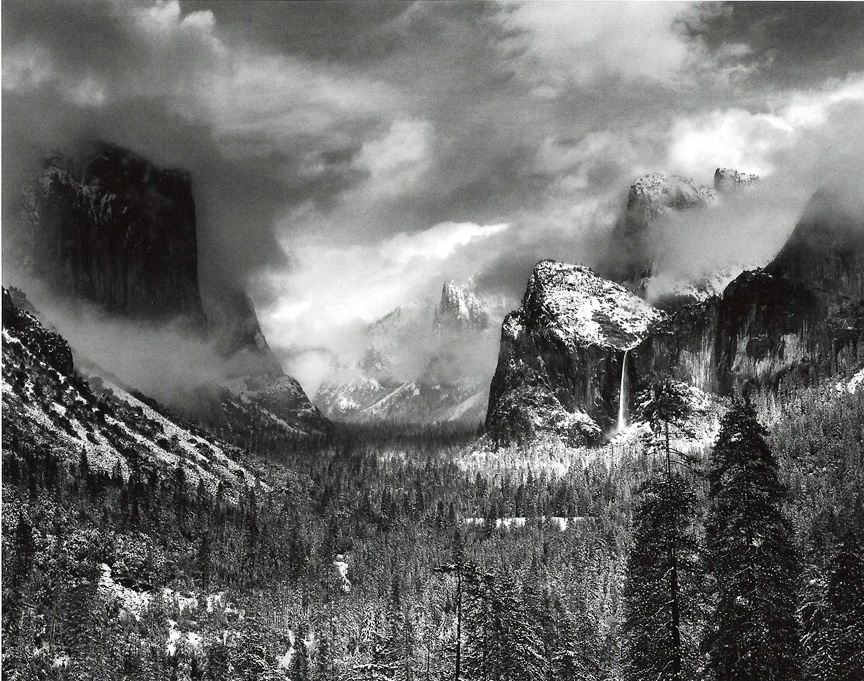 One of Ansel’s many defining gifts was his ability to approach new things with curiosity and enthusiasm.  Ansel saw the digital photography revolution coming.  A year before in died in a May 1983 interview with Playboy Magazine, Ansel gave his thoughts about the future of photography, he said:

In electronics, the technology we have now can do far more than film.  As the world’s silver resources are depleted, these new technologies are particularly important…..Electronic photography will soon be superior to anything we have now.  The first advance will be exploration of existing negatives.  I believe the electronic processes will enhance them.  Then the time will come when you will be able to make the entire photograph electronically.  With the extremely high resolution and the enormous control you can get from electronics, the results will be fantastic.  I wish I were young again!

I believe that if Ansel were alive today he would have fully embraced digital photography in every way.  Given the techniques Ansel used to develop his negatives and make his prints; mixing various chemicals, dodging and burning, using different papers, etc., he did in the “chemical” darkroom what we can now do on our computers using the digital darkroom and we have more control today than he ever dreamed possible.

Below is my first view of Yosemite Valley in May 2008.  While maybe my image isn’t quite up to Ansel’s standards, my first experience seeing the valley was just as exciting and special as Ansel’s was in 1916! 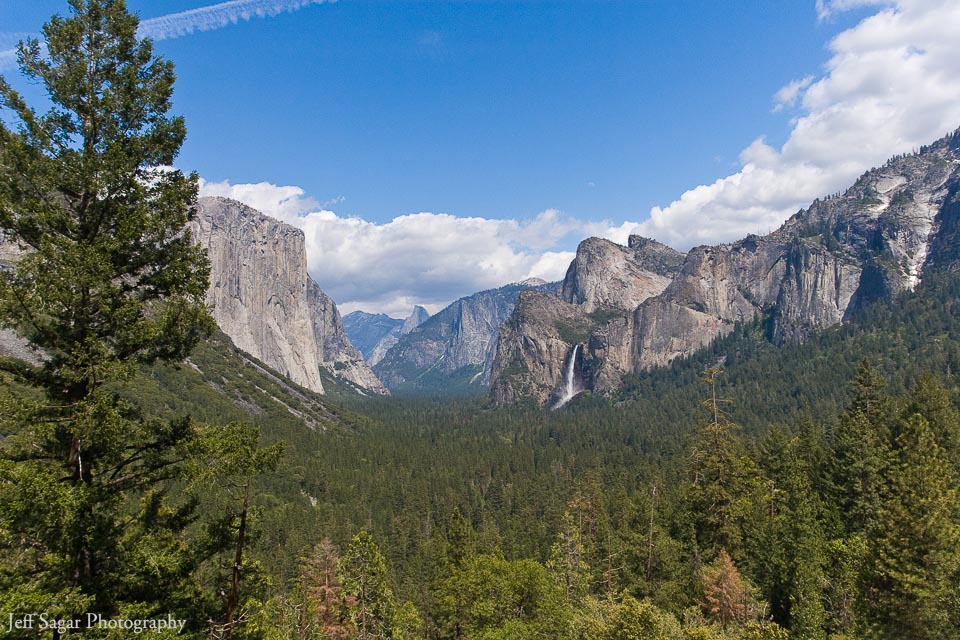 Yosemite Valley by Jeff Sagar, May 2008 – Click image to enlarge

If you’d like to read more about Ansel Adams and his photography, I recommend the following resources all of which can be found on the world wide web.

Looking At Ansel Adams: The Photographs and the Man by Andrea G. Stillman

Yosemite and the High Sierra by Ansel Adams

Ansel Adams: Examples, The Making of 40 Photographs by Ansel Adams