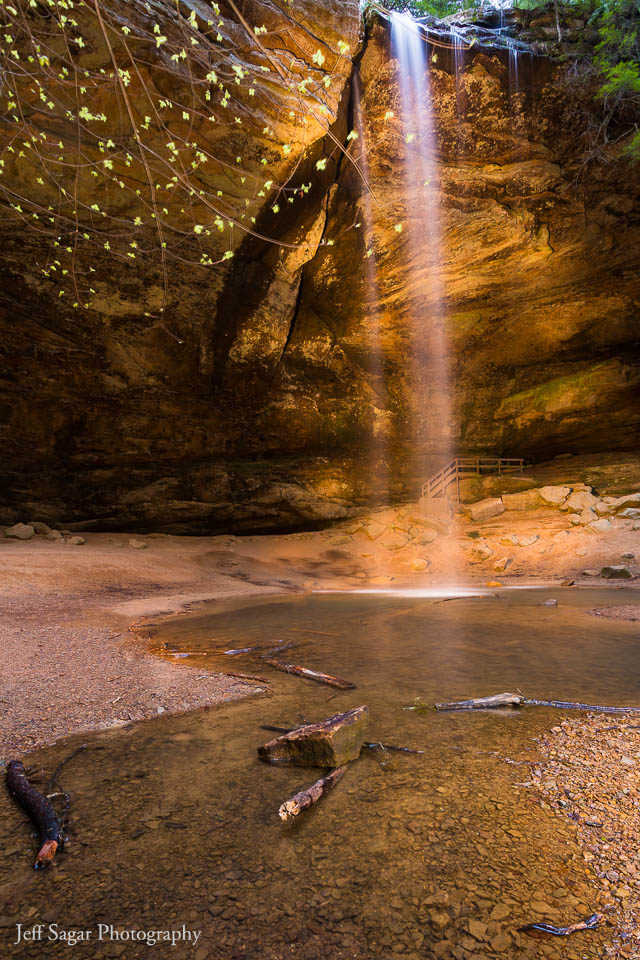 Ash Cave after being “light painted” – Click image to enlarge

Located in the southernmost reaches of Hocking Hills State Park, Ash Cave is beyond doubt one of the most spectacular features in the entire park. It is the largest, most impressive recess cave in Ohio, and is named after the huge pile of ashes found in the cave by early settlers. The horseshoe-shaped cave is massive; measuring 700 feet from end to end, 100 feet deep from the rear cave wall to its front edge with the rim rising 90 feet high. When there has been enough rain, a small tributary of the East Fork of Queer Creek cascades over the rim forming a beautiful waterfall.

This image of Ash Cave was taken about half an hour after sunset in almost complete darkness. I wanted the scene to be fairly dark so I could try a technique called “light painting.” Light painting isn’t a new technique, but I’ve wanted to experiment with it for some time and decided this would be a good opportunity to give it a try. After a few test exposures, I decided to use an exposure of 30 seconds at f/11 with an ISO speed of 800.  A good friend helped me by lighting the cave wall directly behind the waterfall with a powerful spot light while I fired an external flash several times to bring out additional details of the cave during the exposure.  I’m really pleased with this image, especially since it’s my first serious attempt at light painting. Now that I’ve gotten a little experience with it, I can’t wait to try it again…. I’ve already thought of a lot of creative uses for it!

To see more images of Ash Cave and other areas of the park, see my Hocking Hills State Park gallery here.

If you have any questions about this website or my photography, I’d love to hear from you.  Please click here to email me or leave a comment.